Yamaha P-45 (or P-71) Digital Piano will not play audio through my iPad Headphones.

So you want to practice your piano, but don’t want to annoy your wife or roommates? I’m using Flowkey and Youtube to learn piano. And I want to play along and listen to it through my iPad headphones so no one else can hear. But there is not a simple way to do this.

The Yamaha P-45 USB/MIDI cable will NOT pass an audio signal to the iPad. It only sends MIDI data, i.e. the keys you play. Flowkey, for instance, will not play the Yamaha piano audio through the iPad headphone jack. So, even though Flowkey recognizes the MIDI information, and can tell which note you’re playing, you WILL NOT hear the sound of the note through the iPad headphones.

Use A Piano App In Background of iPad:

Use most any piano app from the Apple App Store. They will use the MIDI connection to play your notes inside the iPad. Run that piano app as a background program. Then you can open Flowkey (or Yourtube). Flowkey still reads the data from your Yamaha P45 piano, but the actual sound is being played in the background on the piano app.

It’s available for free in the Apple App Store.

Play Along and Listen Via iPad Headphones:

This method works for Flowkey, Youtube, Safari, Chrome, and other apps. It’s available for free in the Apple App Store. 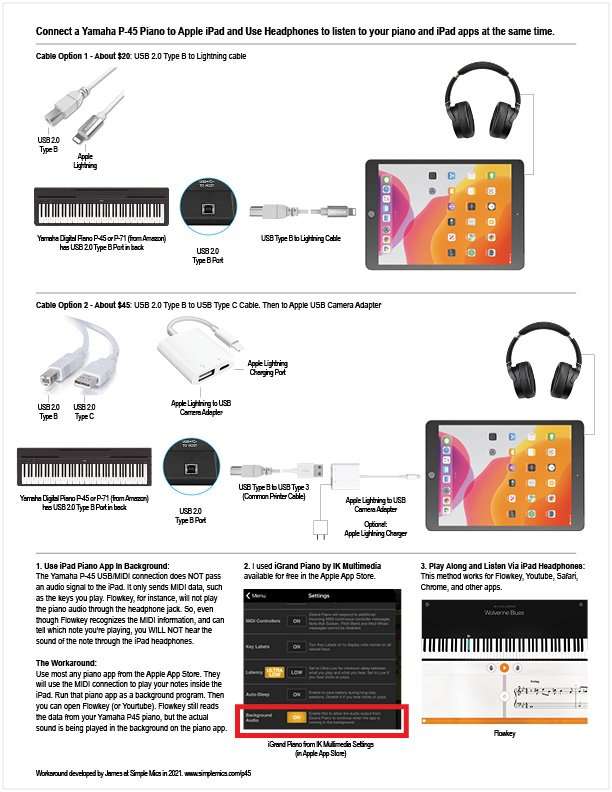 Workaround to hear both the piano and iPad app audio through the iPad headphone jack, especially for Flowkey.

You can also get the OFFICIAL Yamaha iPad connection manual here.

You need a cable to connect your Yamaha P45 to your iPad. You have two options.

One app plays the Yamaha P45 sounds. The other app is used at the same time. The important thing here is that you use the piano in the background of the iPad. The other app you use normally. This hack works for Flowkey, Youtube, Apple Safari, and Google Chrome.

In my case I use iGrand Piano from IK Multimedia. I also tried Apple Garage Band, but the iGrand app sounded better.

a. In the app settings, choose Background Audio “ON.”

b. Adjust the iGrand volume level up pretty high. This volume level lets you get the piano sound louder or softer than the other apps. Like Flowkey, Youtube, Safari and Chrome. 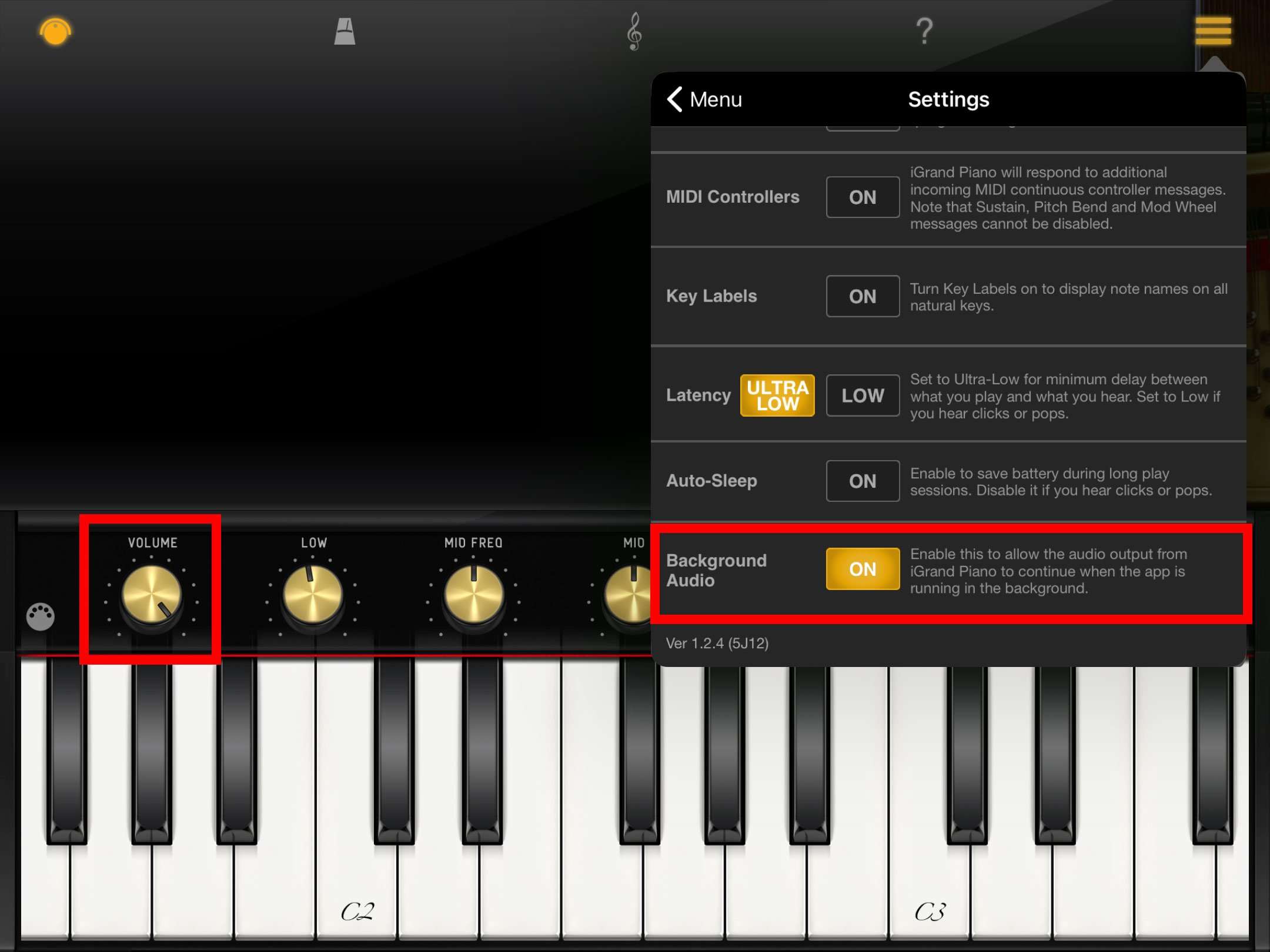 Open any other app and still hear your piano playing, like Flowkey for me. 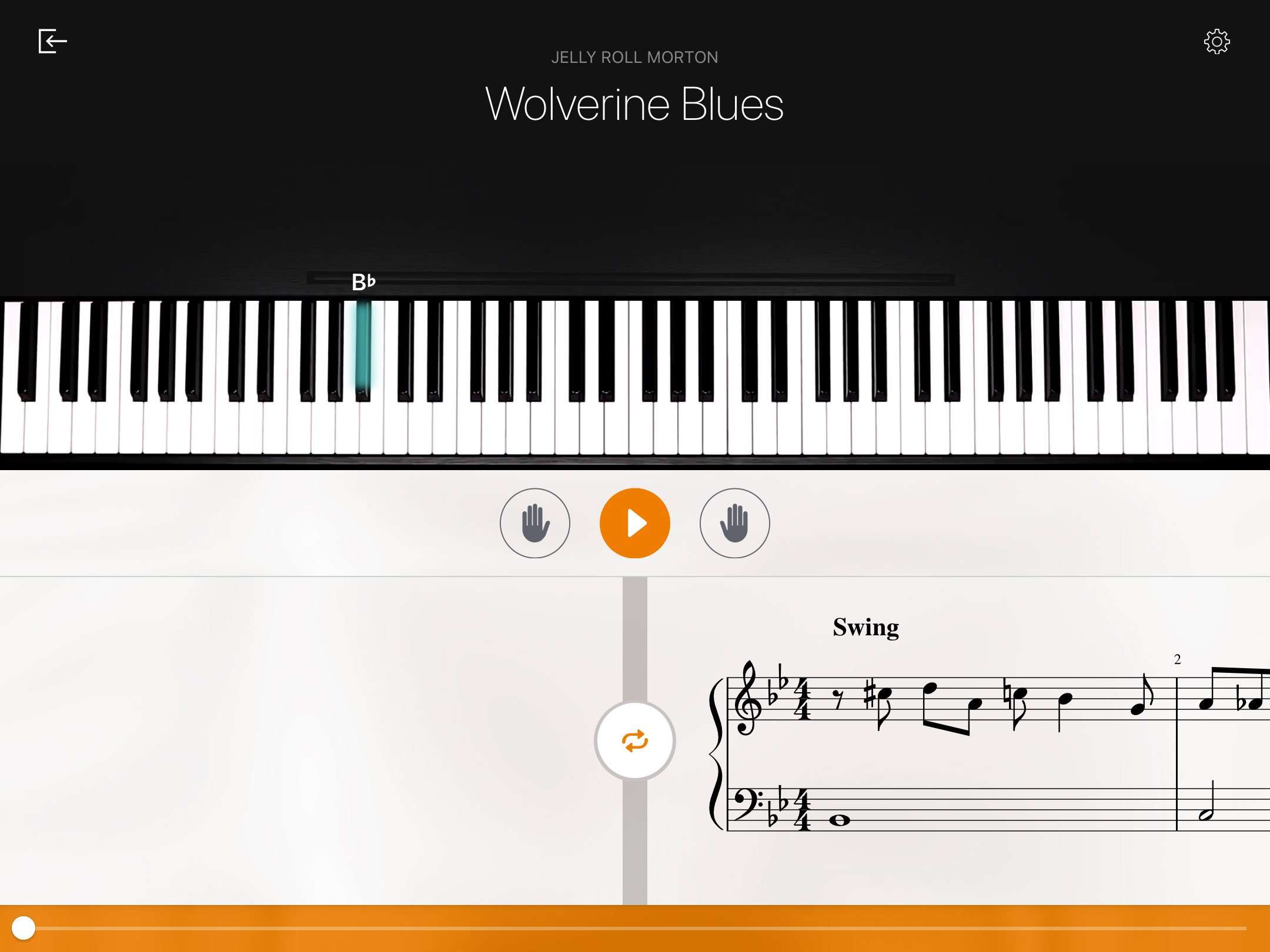