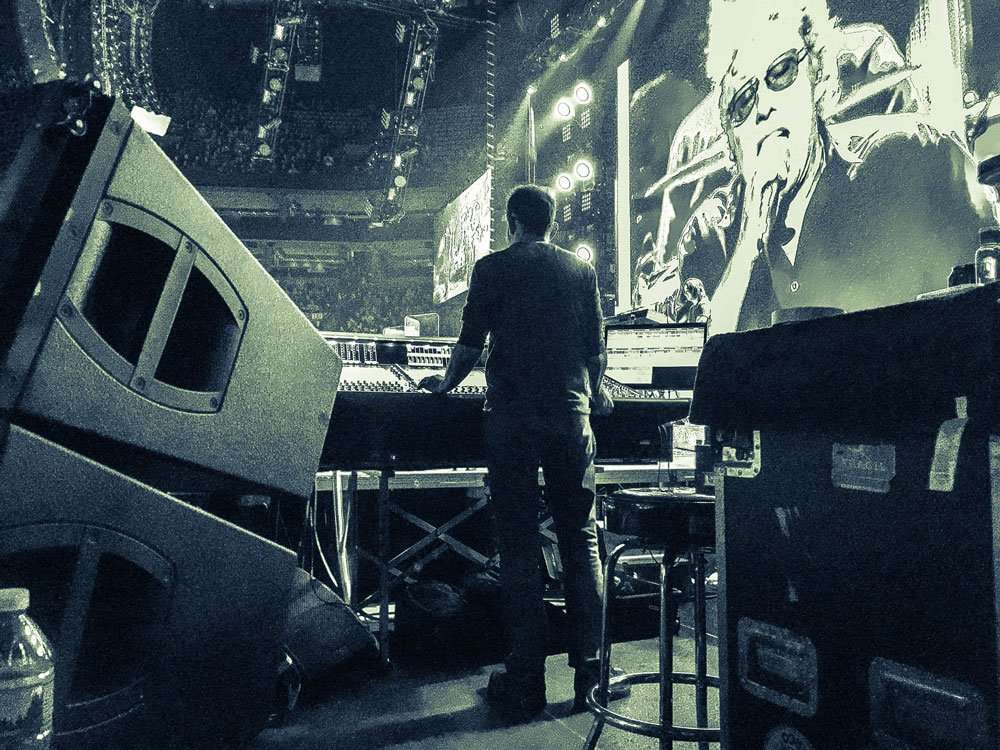 09 Mar Geeking out with The Who

Posted at 15:30h in The Blues by JamesWaldron 0 Comments
0 Likes

A long story, but pretty cool.

Monday night my wife and I had the great pleasure to see The Who show in Boston at the Garden. The sound directors Simon Higgs (20 years with The Who and Queen) and Bob Pridden (50 years with The Who, including at Woodstock) graciously invited us backstage for the event. Higgs and Pridden are the two guys who bought harmonica microphones from me, for Roger Daltrey.

Simon took us for a tour of the stage, and explained his mixing board to me. His job is to control the sound into the wireless headsets for all the band members except Townshend, who still uses floor monitors. Pridden designs and runs of the entire sound for the band including the amplification setup, layout, and all the technologies used on all of the tours. Fascinating. Quite unexpectedly Mr. Pridden, who I’m sure has plenty to do at every show, came up to me and asked, “Are you the harp mic builder?” We introduced ourselves, and he thanked me for the excellent equipment. I was totally floored.

Simon and I discussed the three microphones I had built for them. He said at first their team went directly to Shure for assistance, but no one there had any vintage stuff left. I supplied the team three mics, each with a slightly different tonal range common to the elements of the time. A 1950, 1959, and 1963 element, each in a different vintage Shure green bullet shell. Their favorite sound comes from the 1950 Shure controlled-reluctance element I harvested from a vintage Revere reel-to-reel tape recorder from the era.

Another cool moment was during our chat with Simon. He brought us over to a road case, opened up a drawer and started rummaging about. I could see my three mics inside, still in their ten-cent clear plastic deli containers I shipped them in. Out pops a quite lovely, totally chrome bullet mic. Simon gives it to me and asks “What do you know about this mic?” Just then I realized that I am quite full of arcane information in a narrow field. “That’s a mid 50’s Astatic 200S desk mic. It’s been machined down to the head. It’s also been freshly chromed, as they were never produced with that finish. Judging from the weight, inside is probably a reissue crystal element, as the original elements rarely lasted this long without drying out and crumbling.” “Very thin sound,” noted Higgs. “Well, if you’d like to send it to me I’m happy to switch out the element to a better alternative.” Guess I’m a born salesman.

How did The Who find me? To start, Simon noted jamesw120.sg-host.com is the best-looking web site of all the harp mic builders out there, and believe it or not there are quite a few. Secondly, they were impressed with my detailed response to their introductory email, my perceived knowledge, and passion for the obscure and comically narrow worldwide harp mic market. A true geek.

Sadly, the one song my microphones are used on, “Magic Bus,” was not on Monday night’s set list (which otherwise was fantastic!) Roger is still recovering from his bout with viral meningitis that postponed the current Who tour for 6 months. Looks like the next time my microphones will be used by Daltrey will be in the Summer In England.