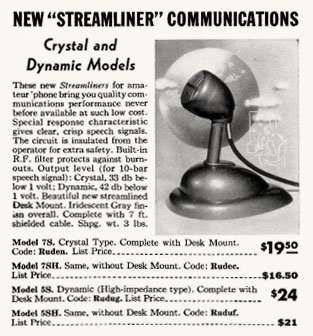 Since the 1950s, blues harmonica players have amplified their instruments with bullet-shaped microphones and tube amplifiers. But how it all started remains a mystery.

According to one legend, the mac daddy of all Chicago blues harp players, Marion “Little Walter” Jacobs, innovated the technique by playing his harmonica near a bullet microphone. The result was a punchy mid-range sound that could be heard even over an electric guitar. Overdriven tube amplifiers produced distortion at higher volumes, adding an essential ingredient to Little Walter’s sound.

Dennis Gruenling and one his many vintage Shure ‘Bullets’

Other blues harp enthusiasts, like David Kott who has devoted an entire website to Shure’s Green Bullet mics, believe that the early greats (Little Walter is still considered the king of all post-war blues harpists) used whatever mics were available to them, especially in the studio.  We’ll never know for sure, because Little Walter died in 1968. Still, credit goes to Little Walter for taking, according to music journalist Bill Dahl “the humble mouth organ in dazzling amplified directions that were unimaginable prior to his ascendancy.” One way or another, the Shure 520 was there just about from the beginning and became one of two blues harp must-haves (the other is the Astatic JT-30) for the next 60+ years.

The “Green Bullet” is a new Shure Controlled Reluctance Microphone.  It is a magnetic unit, especially designed to provide quality music and speech reproduction at moderate cost.  The “Green Bullet” is practically immune to the effects of high temperatures and humidity.  It is a rugged streamlined unit that lends itself to fine quality low-cost installations where durability is an important factor.

The “Green Bullet” has a stability assured by unique control of the reluctance of the magnetic system.  It features: high output, good response, high impedance without the need of a transformer.  The “Green Bullet” has a beautiful modern metallic green finish with a plated grille.  Frequency response is 100 to 87000 c.p.s. (Editor’s note: The use of c.p.s. (cycles per second) as the technical nomenclature of Hz (Hertz) was not introduced until the 1960s.) Furnished with 15’ single-conductor shielded cable.”

Evolution of the Shure Green Bullet

How did the 520 become a favorite of harmonica players?

Unfortunately, these details are lost in history, but Pettersen offers these observations:

• The 520 housing fits nicely into cupped hands and allow the harmonica to be comfortably placed on top of the grille.
• The original 520 was high impedance. With the addition of a 1/4” male phone plug, it worked well with guitar tube amplifiers available since the 1940s.
• The $16.50 price in 1949 was affordable for most musicians. In comparison, the model 55 Unidyne was $67.50 – four times as expensive.
• The combination of the harmonica being so close to the mic element, and the mic output level being great enough to overload the guitar amp, led to a distorted, funky timbre.  It is unknown if this was the desired timbre or if this timbre simply became associated with blues harp.

How to Get the Blues Harp Sound

We called award-winning East Coast blues harp player, Living Blues top ten CD artist, radio host of “Blues & the Beat” and collector of vintage harp mics Dennis Gruenling and asked him to provide a few tips for blues harp newbies.  What he told us is what he tells his students:

1.  Choose the right key harmonica. For most blues, rock & roll, and country harmonica you hear (even in those TV commercials and movies) harmonica players choose the “2nd” position key harmonica to play, with the same key as the song. For instance, if the song is in the Key of E, 2nd position (a fourth up) is a harmonica in the key of A.

2.  Learn basic harmonica techniques. The harmonica was actually made to be tongue-blocked, which is why it is tuned the way it is. You can accompany any melody you play in 1st or 2nd position with chords all by yourself! Tongue-blocking also enables you tone to be richer, and makes it easier to do other effects like shuffle rhythms, tongue-trills, octaves, etc…

4. Listen to the greats. Players such as Little Walter, Big Walter (un-related, but equally as good), Sonny Boy Williamson I & II (also un-related but both pioneers), James Cotton, Junior Wells, George Smith, and others.

Where to Find The Green Bullet

The current model of the Green Bullet is the Shure 520DX, widely available for about $120, depending on where you shop.  There are also sellers of early vintage bullet-style mics and mic parts on the Internet with 1950s-era selling for much more.   As always, use caution when purchasing from auction sites.  Reputable collectors, who restore and rebuild vintage mics, can be found with some careful research.

Now, all you need is a blues name …

If you don’t want to rely on one of the many web-based blues names generators to give you an authentic-sounding names, here’s another way to do it:

• First, think of an ailment of affliction.  Yuppie-type ailments like tennis elbow or shin splints are not suitable for a blues name.  This is your first name.

• Add the name of a piece of fruit and you have your second name.

• End it with the name of a former U.S. president.  Put them together and you have a proper blues name.

The goal here is a name like Blind Melon Jefferson, but you can also end up with something like Stuttering Peach Harding.

…and the legendary mic.