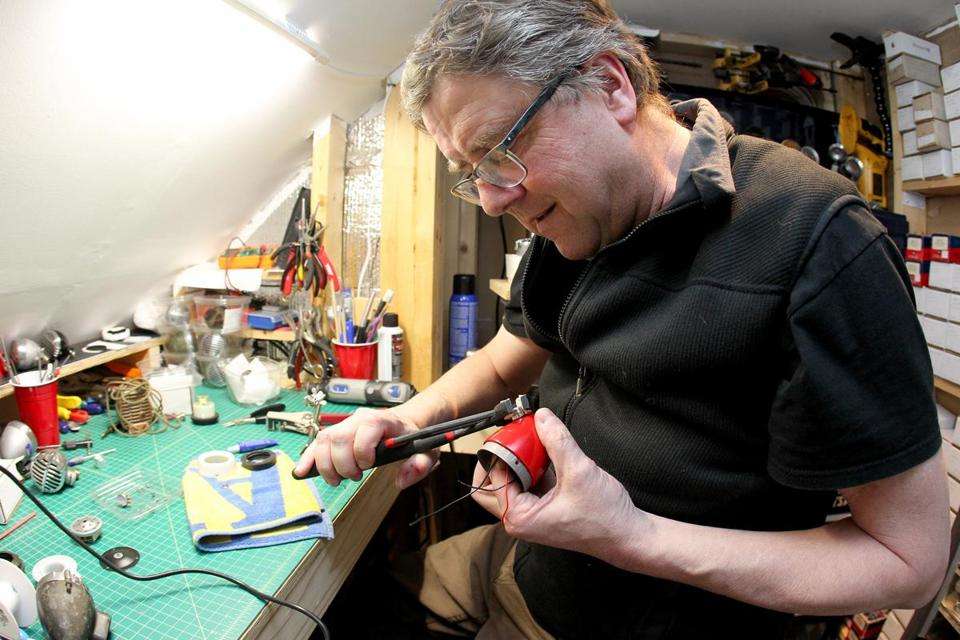 Posted at 19:31h in The Blues by JamesWaldron 0 Comments
0 Likes

PLUM ISLAND — James Waldron stands 6-foot-6, and his home workshop is a cubbyhole under a staircase. It’s a tight fit between the drill press, the dozens of tools, and the cabinets full of parts. But when he plugs one of his custom harmonica microphones into a small vintage tube amp and picks up a harp, he turns the tiny space into a smoky blues club on the South Side of Chicago, circa 1955.

“You want to cup your hands to control the sound,” he says, demonstrating. “A bullet-shaped mike is easy to hold when you’re cupping your hands. And if you make a tight container around it. . . ”

He begins to blow. The sound blasting out of the speaker is part wail and part bellow, with a ragged edge of distortion. It’s James Cotton, Little Walter, or Junior Wells, mojo fully working’.

After a few bars, Waldron puts down the harmonica and says mildly, “That’s the sound people want.”

His Simple Mics custom harmonica microphones, built from vintage components, attract buyers from all over the US and overseas.

If the members of the Who put “Magic Bus” in their set list at TD Garden on Monday night, Roger Daltrey will play his harmonica through one of Waldron’s microphones.

Preparing for a fall tour last year, the band discovered that Daltrey’s existing harmonica mike was faulty. “We tried a modern Shure microphone, and it didn’t have the sound,” says Simon Higgs, monitor engineer for the Who. “We tried to re-create the sound using different amplifiers and distortion pedals, and we decided we really needed to go back and look at the source.”

Higgs soon found the Simple Mics website and eventually bought one to use on “Magic Bus” — and two more for backup. Each had “a pre-1955, Shure 520 shell with original finish, dings and all,” Waldon says, with internal components from the 1950s and early ’60s.

“James understood exactly what we were looking for,” Higgs says, “a warm, distorted sound.” It’s different than the clean, bright sound of Daltrey’s harmonica played through a standard vocal microphone on “Baba O’Riley,” Higgs notes. (An illness postponed the tour, and Boston is one of the first rescheduled dates.)

By e-mail from Salmiyah, a seaside town near Kuwait City, Steve MacAulay says playing his harp through one of Waldron’s mikes “sounds like home” to American soldiers and contractors who come to hear him perform with the Ali Sleeq Blues Band . “The fact that the element in the mike is 1957 means it sounds like Chicago,” he says. “The honk on the tone is incredible.

“One soldier told me that the harp made him think of his mother and father. That was James’s mike that did that. I was very moved,” MacAulay says.

Waldron grew up in Chelmsford loving the J. Geils Band, and eventually began trying to play Magic Dick’s harp solos. As a student at UMass Amherst, he saw Cotton and Muddy Waters perform at the Rusty Nail in Sunderland. By then, he was already playing blues harp on stage with anyone who’d have him. He even bravely or foolishly went harp-to-harp on stage with James Montgomery once. “He cut me to shreds,” Waldron says with a rueful smile.

For the last 16 years, he’s been gigging all over northern and central Massachusetts as a member of the Walk That Walk blues band, which plays the Plum Island Beachcoma on April 3. His showcase numbers include classics “Boogie Chillen,”“Rocket 88,” and “Little Red Rooster.” But he grew dissatisfied with the tone of today’s microphones, so a few years ago he started prospecting for old mikes at swap meets and rummage sales and on eBay. His workshop filled up quickly.

The key to it all is the “element,” which converts sound into an electrical charge. He uses the “controlled magnetic” line of elements made for Shure mike from the 1940s until 1997, and puts them into vintage bullet-shaped shells from several different brands with less-reliable elements. The most sought-after components are the oldest — the element in his personal mike dates to 1949 — and were used for public address systems at bingo parlors, dance halls and baseball stadiums. Parts like cables and screws are usually new.

His top-of-the-line mikes go for $400 or more. Some guys — and his customers are all guys, or women buying gifts for guys — prefer cleaned-up, newly painted mikes with shiny chrome. Others savor signs of wear and tear. The mikes have a strangely automotive appearance, with their metal grills and streamlined postwar-American design.

“Sometimes I have to shave this down to make them easier to hold,” Waldron says, running a finger along a ridge of trim.

He has competitors. One specializes in a more polished-looking product, another wires his own elements. But Waldron’s customers say the appeal of his mikes is not in the specifications.

“It’s that big, dirty, intense sound,” says Ross Garren, a professional harmonica player in Los Angeles. “What I love about James is that he’s super into it.”

Waldron is a freelance Web designer by day, with long experience in the ad industry. In 2009, he released “Reel People,” a quirky documentary on the history of sport fishing on Plum Island that he made by himself. There’s something analogous to fly-tying in his work under the stairs at the basin-side home he shares with his wife.

The mikes have only 15 or so parts, even when he adds a volume control. But twice that many tools are involved in making each one, from hacksaw and soldering iron to tiny wrenches and pliers. Add in the many hours hunting for components, and it’s clearly a labor of love, given what he says is a narrow profit margin.

Joel Brown can be reached at jbnbpt@gmail.com.

Sorry, the comment form is closed at this time.